Origin of the haunting: 17th Century

Background of the haunted place: The oldest parts of the castle date back to the 13th Century. Most of the existing castle was built in the 14th/15th Century. The four towers are named after their builders. In 1596 Alexander Seton bought the castle. His wife Lilias' ghost tells the story.

Ghost Story: I lived here for five years before my death. I displeased my husband because I did not bear him a son. We had been so happy together and when I fell pregnant he was delighted. But we were blessed with a daughter and not a son. This made him angry.

My death came in May 1601. How did I die? It remains a secret All I can tell you is that five months after my death, my husband married my niece. They were not allowed to forget me though. On their wedding night they were awakened by deep sighing, which they assumed was the wind. However, when they awoke the next morning they found my name scratched, upside down, on the high window ledge. It can still be seen to this day.

There is a room in the castle which is never opened because people believe something terrible will happen to the owner of the castle. Some think this is where I died. You might see me leaving this room and wandering the passage. I am the lady in the long green dress. 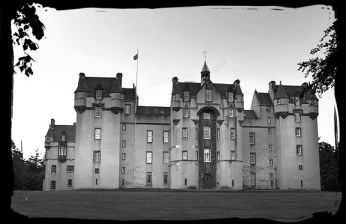